Since 2014 we have been publishing daily horse racing tips produced using Artificial Intelligence. Artificial Intelligence, or AI, has recently received a lot of publicity but has been a focus for research for many years. In fact, the techniques we use for RacingOracle tips date back to the 1970s. The predictions produced on this site are the product of an on-going effort of analysis and investigation into applying AI techniques to horse racing.

We been successfully using AI to predict the results of greyhound races in the UK since 2006 (Greyhound Predictions) and have adapted the system to horse racing.

Broadly speaking, the idea is to find patterns in inconsistent data. The human brain has evolved over thousands of years to be particularly good at this task. A professional horse racing tipster can quickly analyse the form book and spot a horse with good value in a race. This kind of analysis is particularly difficult using traditional computation methods as the data will naturally be misleading and incomplete. Therefore, we use AI techniques that attempt to “learn” the task of picking a winner by mimicking biological systems.

Many different machine learning approaches have been applied to horse racing such as Artificial Neural Networks and Naïve Bayes Classifiers. At RacingOracle the most successful method has been the use of a Backpropagation Neural Network (see below for details).

An Artificial Neural Network (ANN) is first trained on input data. In the case of horse racing the input data is a large corpus of race results. The tricky part is deciding on which metrics to include in the input training data such as win % over X number of races, gender, trainer, jockey, going etc. We are constantly refining the metrics used in our system with differing sets of metrics used for flat racing, hurdles and steeplechase (we have also seen a difference in the performance of metrics between racecourses – this may be due to issues with our source data).

The ANN is repeatedly trained on the same input data – each round is known as an epoch. The data is randomised at the beginning of each epoch. The ANN will never perfectly match the horse racing input data so a decision must be made when to stop training. Training with too many epochs can result in over-training of the network where the specific input dataset is “learnt” resulting in a poor ability to predict new races.

The trained ANN can then be applied to predict new races. For RacingOracle we use several different networks for each of our featured courses. The best performing network over a minimum of 50 races is chosen for each course. Every morning our system predicts the results for the day’s races using the best performing network. Often races will be excluded due to a lack of reliable past data or if the system cannot confidently pick between the runners. Currently the system generates between 10 and 60 tips per month.

It is not possible to predict the winner of every race, but we believe a well-developed machine learning technique can pick winners as well as, if not better than, a professional tipster based on form alone. Our free system is already outperforming many tipsters charging up to £40 per month (our tips are proofed on independent tipster review site racing-index. We have a consistent strike rate at just over 19% generating a profit of 49.40 points (with Betfair) from 415 tips in 2017.

To successfully profit from betting on horse races we suggest combining tips with a Staking Plan. Intuitively, it makes sense to stake more on a lower priced horse than one with long odds. Many strategies have been developed over the years, we would recommend taking a look at the Kelly criterion.

The building block of a neural network is an artificial neuron called a perceptron. It can be thought of as a simplified model of the biological neuron in the brain. The concept is straight-forward – inputs to the perceptron are combined and processed to produce its output.

The processing power of perceptrons comes from combining them to form a network, an Artificial Neural Network (ANN). The inputs to each perceptron are combined with a weight to produce its output. These weights are set to a random value when the network is first initialised.

A layer of perceptrons can be used as the input to a further layer before the output node. Multiple such hidden layers may be required to best fit the data.

To train the network, the output of the network is compared with the target output to find the error. The weights of the input nodes are then adjusted according to the error which is then used to update the weights of the previous layer of nodes in a technique called back propagation.

For RacingOracle we have built our own back propagation neural network, but it is now a lot easier to test AI bettings systems with commercially available cloud based tools such as Google’s Cloud AI https://cloud.google.com/products/machine-learning/ and Microsoft’s AI platform on Azure https://azure.microsoft.com/en-gb/overview/ai-platform/. 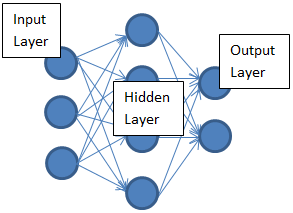 Every morning our machines crunch through hundreds of metrics and test the results with our Neural Networks. The system is constantly being refined with the aim of developing a system that is profitable over the long term. It has been in profit for 2 out the 3 full years in operation. We try to keep the blog page up to date with major changes / improvements.

The results of all our tips are available on the site the following day. Visit our results page for our complete tipping history. The tips are independently verified at https://www.racing-index.com/tipsters/proofed/racingoraclecom.html.

We would love to hear from you about what you think of the site, the tips , AI in sports betting and in general, and your own horse racing betting. Keep in touch on Twitter and Facebook.